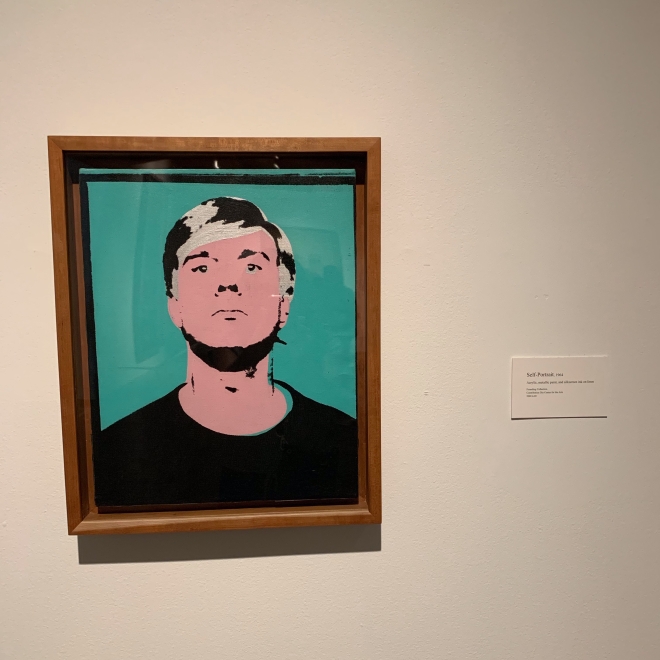 I stared into the camera, hoping that the lighting choice I had selected would be the most flattering one. The instructions said to sit for three minutes while my movie was filmed. I knew how it was supposed to look. I had just visited the room nearby showcasing Andy Warhol’s “Screen Tests” and saw the beautiful people he captured in his films. I should be doing what they were doing, right? Tilting my head a certain way, allowing the light to hit me just so and making me appear to be a fascinating person. But as someone who has yet to perfect my selfie face, I found myself intimidated by not knowing how it looked from the other side. And noticing the others waiting for their turn, I worried that I wasn’t living up to the moment. Here, at the Andy Warhol Museum, surrounded by the ultimate in celebrity culture as art, I worried that my video might be…..boring.

I had come all the way to Pittsburgh to see this museum. I had braved the groups of Steelers fans cramming the sidewalks as I crossed the Seventh Street Bridge and almost missed the entrance amid the scaffolding. I had waited patiently for my ticket when a large crowd got in line just before me. And I awkwardly stood watching the man ahead of me as he stared unflinchingly into the camera for three minutes straight. When it was finally my turn, I decided I was going to be different. So, instead of sitting still, I made intentional gestures. I wondered how Andy Warhol would respond to my decision. Would he love it? Would he hate it? Or was that the whole point, to simply see how someone reacts to the camera?

It was only after my video finished, as I watched the next person in line set up their lighting, that I reflected upon what it meant to be seen in that way. I had come to the museum without much planning, as I invited myself along on my sister’s last-minute trip to visit a friend in the area. I had never been to Pittsburgh, and while I was curious to see the city, it was a chance to visit the museum that had me quickly packing my suitcase. The museum is laid out chronologically, and it was interesting to learn about Warhol’s childhood and his early work. But my excitement piqued as I approached the pop art and celebrity portraits. This was what I had come to see.

I was a generation late to the Warhol and Studio 54 era. It all seemed so fabulous and Gasby-esque, in parallel to the gritty reality of New York City in the late 70s and early 80s. While Warhol’s art defined an era, it is still relevant to the cultural landscape today. Looking at his celebrity portraits, each subject presented in pairs as identical images silk-screened to dissimilar effect, I couldn’t help but to see the analogy in how we use filters on our pictures today, manipulating images to highlight different areas. Was he ahead of his time? Or was he setting the trend?

Warhol’s art is the essence of cool, but its lasting effect goes beyond his technique. The message his art sends about celebrity culture endures in our current super-saturated social media world. We are just as fascinated with celebrities today as we were then, except that the definition of celebrity has expanded. Warhol’s prediction that, “In the future, everyone will be world famous for 15 minutes” presages the idea that we are all celebrities now. And everybody’s fifteen minutes is happening simultaneously.

Continuing to tour the museum after filming my video, I found myself walking with more confidence. My experience of going from a museum visitor, an observer of his art, to a participant in his art made it impossible not to feel noticed, not to feel like I was somebody worth seeing. But what exactly had I done, except sit and look at the camera? And yet, isn’t that how celebrity has evolved? Looking at his films, with the camera focused on a pretty face, we become interested in whatever the pretty people are doing, even as they do nothing. It’s impossible not to see his films as a precursor to reality TV. It was only once the means of content creation became more accessible, and more and more pretty people came across our screens, that we began to expect more of them. How do we choose which pretty people to watch? Well, don’t just stand there, argue already. And thus the rise in conflict culture

The entire museum left me wondering, was Warhol reflecting celebrity culture, or was he establishing it? His work came from an era when access to celebrity was privileged and opportunity to become a celebrity was limited. But now, celebrities use social media and social media creates celebrities. Warhol was at the precipice of this change in who dictates trends and who can be famous. Is our selfie-culture an inevitable progression from celebrity culture? We are all celebrities now, therefore we take selfies? We are our biggest fans? I couldn’t help but to feel a slight sense of irony as I took a selfie next to Warhol’s portrait of Elizabeth Taylor.

If taking a picture of a famous picture is meta, then is taking a selfie in front of a Warhol picture uber-meta? Yet, why did I take the picture? Why was it important for me to document my visit to this museum? Of course, I was going to make an Instagram story. But, more than that, Andy Warhol’s artwork still fascinates me, and clearly others as well. I think that, despite the fact that we can all be celebrities now, being an artist is still something special. Art is more than skill, more than a perfectly balanced photograph or photoshopped image. Art is stimulation. Art makes you question a stroke, an expression, why a thing begins or ends the way it does. Art is a message, a commentary, an observation. Warhol’s pop art is cool, but it also makes a statement on celebrity and society.

Watching my completed video, I thought about how long three minutes had felt as I sat in the chair. And I knew that nobody would watch my video for more than fifteen seconds, if that long, on Instagram. Perhaps the one thing Warhol couldn’t predict was that holding anyone’s attention for fifteen minutes these days would feel like an eternity.